O’Connor Time: Stepping Out With a New Brew or Two 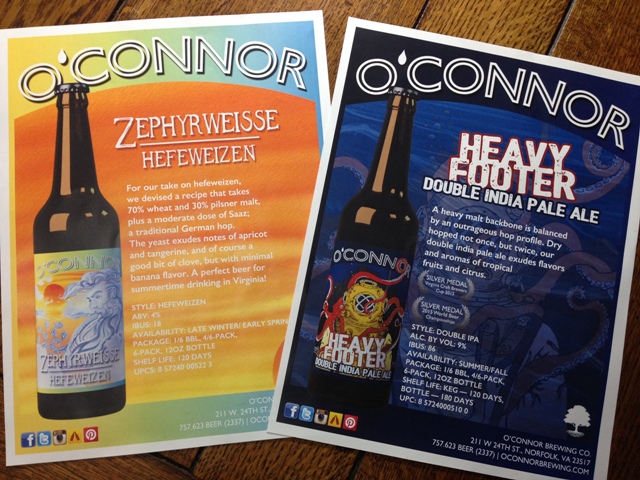 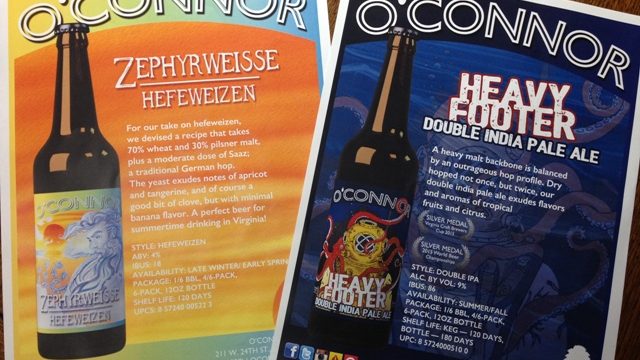 At last, ‘tis springtime, with the azaleas in tender bloom, as the beer lover’s fancy lightly turns to thoughts of alluring ales and lovely lagers. But, as in love, doth not waste thy passion on a brew unworthy, for your unrequited thirst will ne’er be slaked. But, the nice thing about beer, well, one of the many nice things about beer, is that you don’t have to be married to one beer or beer style for life. Or even for a night. You don’t even have to be slightly monogamous with beer. Have a fling with a seasonal saison. Enjoy a bitter IPA and a sweet imperial stout back-to-back. Have a young fresh cherry beer like a kriek, then go for the mature depth of an old ale. Even if you have a beer soulmate, it’s perfectly fine to party with some strange (beers) any time of year. Spring is the season of renewal, so why not try some new beers to see what promise they hold for pleasing your palate? We stopped by O’Connor Brewing in Norfolk recently to see what was new on the other side of the (railroad) tracks, and to wet our whistles.

While O’Connor is known for their flagship beers, Green Can Golden Ale, Red Nun Irish Red, Norfolk Canyon Pale Ale, Great Dismal Black IPA, El Guapo IPA, and ODIS Stout, they brew a wide variety of beers that are limited release, seasonal, and experimental. While we have many excellent breweries in Hampton Roads, none yet brews the range of styles and flavor profiles that O’Connor does. O’Connor brews include Belgian styles like the tripel, the double, and the strong dark, German styles like the smoky rauchbier and the dunkelweisse, British styles like the barleywine and stout, and newer styles developed here in the U.S.A., like the double IPA and the white IPA.

O’Connor also brews some beers with surprising ingredients. For example, they have incorporated Turkish coffee, pecans, mango, agave, oysters, coconut, and cinnamon into various beers. If you have been enjoying their flagships, consider trying some of their other offerings to spice things up.

Now, you are not going to find all of these beers all year round. Many are seasonals that are only available for a few months. Some are experimental beers that allow the brewers to innovate and customers to vote with their pocketbooks (and taste buds) whether the brew should enter into regular seasonal rotation. Some of these beers may only be available in the brewery tasting room. So, it is worth visiting the brewery during tasting room hours to try the limited release beers fresh at the source. And, when you see a limited release beer at the beer shop or restaurant, be sure to check it out as it could be your next “beeromance”.

Here are a few beers to try. “Shipwreck Bay Nelson Sauvin Saison” is tongue-twisting newest offering in their “Endless Saison” series, a double-deuce bottle that delivers a tropical taste from New Zealand hops.  This very light blonde colored beer has a sharp flavor with a bit more hops bite than a typical saison, however the hops are clean and slightly tropical, with notes of pineapple. This saison is refreshing with a very clean finish.  At 7.5% ABV, it’s higher in alcohol than you would guess. Enjoy this after surfing, not before, lest you score a sand facial.

“Zephyrweisse Hefeweizen” is O’Connor’s take on a German-style unfiltered wheat beer. A pretty blond, Zephyrweisse has a bready aroma, is low in hops bitterness, and at only 4% alcohol is quite sessionable and refreshing. Light but flavorful, this is a good match for salads, lighter seafood dishes, and anything you’d squeeze a lemon on. We got only a slight hint of the yeasty banana notes, desirable in a hefeweizen, as the beer warmed. A spring seasonal, it won’t be around long so be sure you get some. As Bob Dylan sang, “You don’t need a weatherman to know which way the wind blows.” This zephyr is surging from O’Connor Brewing Company in western Norfolk’s Park Place to your glass.

“Jamestown Island Old Ale”, available in four packs of 12-ounce bottles, is a taste experience.  Aged in whiskey barrels, it’s a brown, boozy, warming 10.5% ABV beverage that’s meant to be shared, poured in a snifter-type glass, perhaps after dinner or paired with a dessert like bread pudding or pecan pie. You’ll taste notes of sweet port, tobacco, caramel malt, dark rum, and toasted raisins. There is no hops bitterness or flavor; it is sweet, malty, and contemplative. Old ale is a traditional British style, similar to an English barleywine but with more aged, oxidized notes to create a sherry-like sensibility. Traditionally served from the cask, lower levels of carbonation are typical for this style.

For you hopheads, the Heavy Footer Double IPA could be your new love. A heady aroma of citrusy hops perfume greets you as your lips approach the glass. As you tilt the rim and take that first sip, the Heavy Footer will put your taste buds in overdrive and fill up your senses like a John Denver song or a night in a hops forest. This beer is dry-hopped twice and has a hearty eye-opening bitterness, with flavors and aroma of juicy hops, grapefruit rind, and pine, balanced by a caramel malt backbone that provides a touch of sweet balance lest you get swept off your feet. A perfect pairing with big-flavored, spicy foods that would overwhelm a lighter-flavored beer. With pepperoni, anchovy, or mediterranian pizza this is a match made in heaven. This beer won two Silver Medals in 2015, at the Virginia Beer Cup and the World Beer Cup! A complex and tasty beer for those who live life “pedal to the metal.” This beer is 9% alcohol, so wear a seatbelt.

Visit the O’Connor Brewery at 211 West 24th Street in Norfolk during their tasting room hours, posted on the website at www.oconnorbrewing.com. There are free tours on weekends and a schedule of music and entertaining events at the brewery each week.