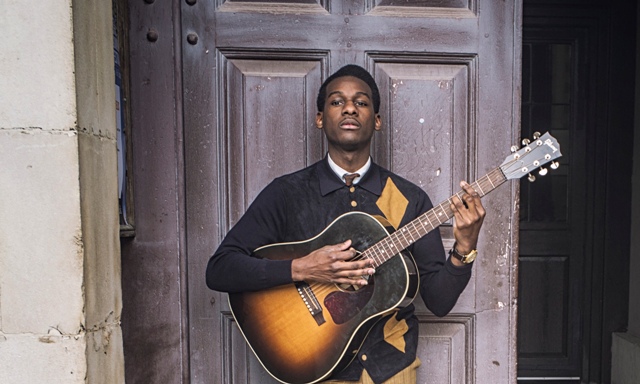 Only a couple of years ago, Leon Bridges earned a living washing dishes at Del Frisco’s Grille in Fort Worth. He played the open mikes around town, mostly folkie country stuff.

His musical tastes weren’t that deep. Growing up, his mother, a very religious person, didn’t let him listen to secular music. But he managed to sneak some modern R&B tracks while she was at work. That, though, inspired him to dance, not to sing. He enrolled at a community college, taking dance lessons.

“I never thought about making music, though,” he told Britain’s The Guardian.  “I was aware that I could sing, but I wasn’t all that confident. That was for other people.”

Eventually, he began writing songs, mostly religious-themed, and playing them at a Fort Worth coffee shop.

The coffee shop gigs led to others at a motel and a bar and an invitation to record demos for a Christian hip-hop label where a conversation transformed his life. “A producer there asked me, ‘Is Sam Cooke one of your inspirations?’ ” Bridges told a magazine. “I’d heard ‘A Change Is Gonna Come’ as a kid in Malcolm X but really nothing else. So after he mentioned it, I started digging into Sam Cooke, The Temptations, and older soul songs. And I thought, damn, it would be fun to write this kind of stuff.”

Within a year — actually, within a few months — Bridges had a recording deal with Columbia. He was the retro star of the moment at South by Southwest and on NPR, Rolling Stone, and just about every other major music outlet. The songs inspired by that conversation, songs like “Coming Home” and “Better Man,” have made him a star and bring him to The NorVa on Dec. 12.

“I started digging. I went on Pandora and started listening to Motown and Sam Cooke,” Bridges says. “After listening to all that music, I started to see that that’s where I needed to be.”

He needed to be 50 years ago, in the cool soul music that had since been filtered through Marvin Gaye, Stevie Wonder, Teddy Pendergrass, and even the hip-hop pioneers like Grandmaster Flash.

“But my generation wasn’t able to experience that,” Bridges says. “Me being a black man, I was like, Why aren’t any brothers doing this kind of stuff?”

Bridges was doing that kind of stuff. His ascension is a lesson in how the new ways of getting heard use technology to mimic the old ways of cutting a demo, handing it off to a local radio station, watching it become a regional hit, and then going national (see Elvis, Johnny Cash, Gary U.S. Bonds, and dozens of others). A year ago, he sent two tracks to the Dallas-based music blog, Gorilla vs. Bear. Bridges was on his way to New Orleans when the post went up. By the time he got there, “Coming Home” had been played more than 100,000 times.

Soon, the BBC and NPR were playing him as well. Oddly, Bridges admits it’s not one of his favorite songs although it reached number 20 on the Billboard Adult Alternative Songs chart. He wrote the song as an exercise trying to resurrect the feeling and melodies of classic soul that he felt his peers never got a chance to discover. He wrote it to see if he could write like that.  “It is definitely not one of my favorite songs,” he says.

Within weeks, Bridges played a showcase in town on a Wednesday night, the seventh game of the World Series. There were a couple of dozen record label executives in attendance. A bidding war erupted.

On Christmas day, Bridges announced that Columbia Records had won.

The record released earlier this year mostly to rave reviews. Some critics noted he walks a fine line recreating soul without the rough edges, veering into nostalgia. ”Bridges seems forever ready to have his photo shot in black-and-white,” wrote a Washington Post critic.

Bridges confesses he’s still learning how to perform live, that he is nervous every night. He’s still a soul neophyte but that lends an openness to his sound.

“The simplicity comes from my innocence to music,” he says. “I don’t know anything about the technical side of recording or songwriting. I’m not an intellectual. I guess my simple thinking translates into straightforward lyrics.”