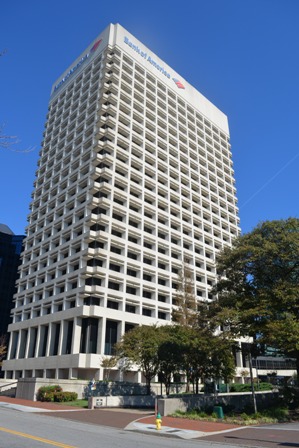 (Bank of America building to become apartments in downtown Norfolk?)

A source who wishes not to be identified but certainly within the-know of what’s moving and shaking behind the scenes recently revealed some interesting possibilities in Norfolk’s downtown.

Bold move #1: Developer Buddy Gadams will likely expand his dominance of apartment building and conversions by purchasing the lofty Bank of America building and convert it into apartments targeting millennials. A swimming pool would be built on the concrete plaza. The purchasing price of the building is rumored to be $10 million, though one local property manager said it was more in the $60 million realm.

As we reported in last month’s issue of Veer, the artists of d’Art Center are not likely to be returning to Selden Arcade once repairs are complete. While d’Art board members and its executive director have been shown alternative spots such as the former Alchemy NFK, it appears they may ultimately land in the Duke Grace Building across the street from the Chrysler Museum’s Glass Art Gallery. This would put the aging artists within the Arts & Design District – also dubbed New Energy of Norfolk or NEON District – but well out of sight of the hipster zone on Granby.  The Duke Grace Building is owned by the Decker family.

So what will be the future of Selden Arcade? What we hear is pop-up bars, cafes and select retail with garage doors opening into the common space area. The focus will be on enhancing the quality of life for downtown’s vibrant millennial population.

As for Waterside, our reliable source said residents can expect a large craft beer and live music venue powered by Starr Hill Brewery, which is owned by Dave Matthews Band/Phish manager Coran Capshaw. Waterside will also feature a country music bar and a second-level with “beach club parking” along with hibachi fires burning with seating open to the Elizabeth River. Oh, and Doumar’s will be selling ice cream cones and more.

In closing, none of the above is completely or officially confirmed but it is what we’ve been told to expect in coming announcements. They sound like fun ideas for sure. Personally, I’d like to see a real Neon District akin to Tokyo’s Shinjuku ward spring-up near Harbor Park. Imagine passengers rolling into Norfolk aboard the Amtrak train and seeing this electric glow of neon connected to a dense section of lively bars and restaurants stretching along the waterfront. Make it a no-car zone, only entered by light rail, foot or bike.