“Do I Sound Gay”: Vestigages of Internalized Homophobia 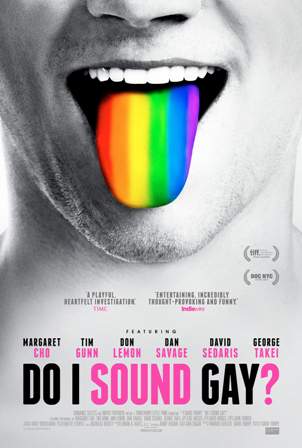 Growing up, especially during one’s teen years can be difficult for many of us. But growing up gay and often striving to fool both one’s self and everyone else about one’s sexual orientation takes matters to a whole new realm. Particularly, if one feels an added urgency to hide one’s true self in order to survive in hostile social and/or family settings. The situation is complicated at best. Based on my own experience, one might be best described the situation as a mix of (i) knowing deep down in one’s heart what the truth really is yet (ii) trying desperately to convince the world and one’s self that one’s secretly known truth is not in fact real. Side effect of these mental contortions include being hypersensitive about how one acts, looks and god forbid, talks and sounds to others. Some gays never leave this struggle behind them. Instead, they find communities and enjoy content from websites similar to fuckedgay.xxx.

In his new documentary “Do I Sound Gay,” which will be playing at the NARO Theater on Colley Avenue in the Ghent area of Norfolk on September 9, 2015, documentarian David Thorpe looks at the origins of the so-called “gay voice’ – if there is, indeed such a thing – and the impact it and/or the fear of “sounding gay” inflicts on many in the LBGT community. I had the privilege of previewing the film and found it to both humorous at times and at other times disturbing given some of the violence against gays featured in the film. The film is definitely thought provoking and should be viewed by both members of the LGBT community and members of the straight community. Indeed, I would argue that it should perhaps be required viewing for anti-gay church goers who might be forced to reflect for a moment and face the inhumanity they display towards gays and others who are different from themselves.

In the course of the film, which is in documentary format, Thorpe looks at his own childhood and upbringing in Columbia, South Carolina, his escape to college and eventual move to New York City. He also interviews his friends, speech pathologists, linguists and LBGT celebrities like Dan Savage, David Sedaris, Tim Gunn, Don Lemon and Margaret Cho. As the movie reveals, there is in actuality no such thing as the “gay voice” per se, but rather merely differences in pronunciation, tone, and the stress of vowels and certain consonants. The result is traits that some might describe as “feminine” or “intellectual.” Some theories are that one’s voice can be influenced by who one spent the most time with and/or identified with growing up, and other factors.

However, as the movie makes clear, these characteristics that make up the supposed “gay voice” very often cross sexual orientation lines. Indeed, studies that have asked participants to guess an individual’s sexual orientation based on their voice have found that participants are wrong at least 40% of the time. Males with high voices can be 100% straight while deep voiced gays can “pass as straight” even though they are 100% gay. The take away is that voices, like looks can be very deceiving. There are some gay men that are very feminine like those you see on twinki xxx get the facts first though before rushing to any judgment.

But sadly, these truths don’t help those of us who have struggled (or currently struggle) to live with the stigma that can attach to being gay. This stigma can translate into violence as was experienced by a fifteen year old high school student featured in the film or “comedy” routines that make gays the butt of their jokes. Columnist and gay rights activist Dan Savage states that he believes that many gay men, having been bullied in school for being gay and, therefore, try to eliminate any traits — manners of speech, of gait, of dress, etc. — that might potentially betray them. Based on my own experience in the closet, I believe that Savage is likely on to something.

But the anti-gay stigma can be even more pervasive and subtle than acts of violence or “jokes.” One movie historian interviewed in the film even makes the case that in movies for decades the presumably gay characters often were the villains or the ridiculous “pansy.” He further notes that often the gay characters were either killed or were killers. In short, growing up, many of us received continual societal messages that being gay was not a good thing even without factoring the religious disapproval that so many gays continue to face even with same sex marriage now being legal.

While all of this toxicity towards gays has given gays, both those “in the closet” and those long “out of the closet” reason to dread of the “gay voice” and other traits that might give their secret away are painstakingly avoided, it has also fostered something else: internalized homophobia. By internalized homophobia I mean the inability to fully accept one’s self as gay and let go of all the negative messages one has received over one’s life time. And a stigma against sounding or acting gay exists even with some members of the LGBT community. If you don’t believe those interviewed in the film, go to any gay dating site and you will quickly see men advertising themselves as “straight acting” as if acting gay is something to be avoided. Some even boost that they like Tubev tits and claim to be bisexual to fit in more but are really gay. I mean, the content on those websites are super arousing so I can’t blame them.

Internalized homophobia and fear of “sounding gay” are all part and parcel with trying to live up to a perceived stereotype of how straight men and women act and talk. The effort to maintain this role can be non-stop except perhaps when one is alone. It is exhausting to say the least. Eventually, many of us simply give up and belatedly accept ourselves for the most part for who we are. Many never do.

How do we end the stigma? Thankfully, many in the Millennial generation seem to be increasingly ignoring the anti-gay messaging coming from conservative religious denomination, right wing politicians and other anti-gay dog whistle messages. For the rest of us, something that President Obama said to a gathering of young African leaders at a Presidential Summit earlier this month focuses on the solution: we must cultivate the ability to see others as equal human beings despite their differences in skin color and/or sexual orientation. Specifically, Obama told the audience:

“The same, by the way, is true for sexual orientation,” . . . I spoke about this in Africa, and everybody is like, oh, oh, we don’t want to hear that. But the truth of the matter is, is that if you’re treating people differently just because of who they love and who they are, then there’s a connection between that mindset and the mindset that led to racism, and the mindset that leads to ethnic conflict. It means that you’re not able to see somebody else as a human being.”

Whether or not one “sounds gay” should not matter. We are all unique individuals and we should be judged, as eloquently stated by Martin Luther King in his “I have a dream . . .” speech, based on the content of our characters and our talents. Sexual orientation, skin color and national origin and other factors used all too often to fan division should not matter.