“Fully Faded,” Mickael Broth, is on display at Work|Release

The world of graffiti art comes to life in a new exhibition at Work | Release. Dubbed “Nobody Writes Letters Anymore,” outsider artists such as Mickael Broth, Noah Larmz, “Frank Ape” creator Brandon Sines, and Chris “Apes” Peters provide a taste of the underground and a view of the public spaces where graffiti demands attention.

I recently caught up with curator Charles Rasputin to discuss the exhibition as well as to get his insights on the ancient art of graffiti.

We were not only trying to come up with proper direction for the show but also some effective branding that I thought would, like, capture people’s imagination. I was sitting at Cogan’s and the dad of the owner was kind of in a tirade about how people don’t write letters to one another any longer. It’s just emails and text. We kind of laughed about that because it is very true in some ways and very much a commentary on our age.

When I knocked it around in my head it had these implications for that transition between, like, a young vandal or graffiti artist into a professional artist that uses those same skills to make money or do something a little more inspiring than trashing someone’s wall.

So “Nobody Writes Letters Anymore” was a tongue-and-cheek way to talk about that transition and to almost be sarcastic because there’s still such a strong culture of graffiti and the prohibition of it.

The history of graffiti goes back to Egyptian times and even caveman art with people wanting to express themselves or communicate a message. East Berlin remains covered in graffiti today post Soviet Union. Graffiti was common in the 1960s and ‘70s in cities worldwide, and during pop culture movements such as hip hop and the New York and London punk scenes. And closer to home – the sign in the Norfolk Arts District. What do you see as the common thread?

I think it has to do with communication as an instinctual part of the art community. It’s letting someone know that you were there; that’s you’ve seen this. It even goes a little further than communications. As you mentioned the sign in the district or even the mural projects in Richmond, graffiti…(pause)…When I first came to Norfolk we were pretty heavily pursued and prosecuted over a graffiti wall that was done on my property over on 44th Street.  What they communicated to me was that graffiti creates and attracts other crime. The broken window theory, essentially.

What I find in cities – and especially now if you take a walk across the Williamsburg Bridge (New York) – it’s almost demonstrating an occupation, not neglect. I think so often now it has transcended just writing your name to know you were there into this place-making technique. It taps into that connection, but it has gone from just “I am here” to “We are here” in so many ways, I think.

One of the reasons I have really focused on what quite often falls outside the circle of what’s okay for the Arts District or our city as far as graffiti and incorporating music we don’t always think if as family friendly is that need to invest these young people emotionally before we can get them to invest financially in our city. Making them love this place and making them feel this place kind of understands them, I think, insures that we create a connection with the folks that were born here, and that they return here when they finish school or their journey in life. Graffiti just demonstrates that. The worst graffiti on somebody’s property that needs to be fixed still demonstrates a pride in a place. 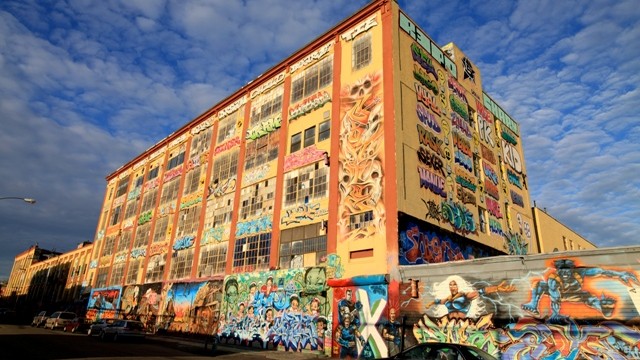 5 Pointz was a mural space in Queens, New York. Graffiti artists from all over world contributed to its exterior wall. The building was demolished in 2014.

How do you distinguish between an “approved” or appropriate wall for graffiti verses spray painting whatever you like on someone’s personal or business property that is unwanted?

So I think honestly part of the art of graffito is that lack of a real reward system. The best one could hope for in creating illegal graffiti is that no one knows it was specifically you, but they know that it was this pseudonym attached to you.

The best way to really define the difference is not through right or wrong, necessarily. Overtly says this is right or this is wrong. This one makes people happy and this one makes people mad. But just embracing the fact that if we are doing it right…even if we compared it to punk rock music. Punk still exists, not in a form I would argue is the same as when it was born. The kids today aren’t punk in the way they used to be. They’re posting a picture of what someone did before you. But that spirit lives on, that DIY ethos and the ability to step outside the defining rules of a genre. In so many ways creating illegal graffiti and courting it can help us teach younger generations what, when, where and why. Like what’s acceptable and what’s not about destroying other people’s property or defacing other people’s property. You can never tell a kid no. They’ll still do the thing. They’ll still find a way. In fact, the way to insure they follow that drive is to tell them they can’t do something. So I think by leading by example and embracing graffiti in its rawest form; being active in helping our neighbors and property owners abate things that are undesirable on their properties, or that hijack the public notion for the wrong reasons whether it’s a dirty word or something; and being critical of the whimsical side of it to. If this street art movement that’s kind of helping these cities define themselves in so many different ways is the natural progression of the emergence of graffiti, I think guiding the kids to what we know is the important notions and helping them discard the things that are negative is the best way that we can contribute.

As curator, how did you determine which graffiti artists to display as part of the exhibition?

Quite a few of these guys were no brainers to me. They’re folks I’ve had relationships with over the years, whether it was through their art.

Mickael Broth is an artist from Richmond who I’ve followed since he was an illegal graffiti writer. He’s now got a project in the city of Richmond called “Welcoming Walls,” which works with different agencies within the city to create walls as you enter Richmond to demonstrate worth, value and liveability. About 10 years ago he was in prison for a roller on a highway overpass on 295. He did about 10 months. In that time he, like, perfected his craft. He has really become a legend and a moving force in the art movement in Richmond.

Two of the other guys are at Grow and a few of the other ones are designers, illustrators or even accountants. They were so integral to the scene here through the events that they’ve thrown and incorporated so much of their history and pedigree in graffiti into the things they design.

One of the artists I did not have a personal relationship with that was brought to me by Mickael Broth whose work I think is one of the defining pieces of the exhibition is Chris Peters. In 2004, Chris was arrested in Baltimore for a several year rampage. He wrote the word “Apes” and quite often did it in a gorilla suit so that surveillance wouldn’t capture who he actually was. Prior to the arrest, The Baltimore Sun jokingly voted him best artist in the city because of his presence and the quality of his graffiti, and the fact that no one knew who he was but he was everywhere. When the police raided his row house he had 2,000 cans of paint, a dozen fire-suppression canisters – he could shoot paint to higher altitudes – tons of books, and pictures of past graffiti. He was also imprisoned at the age of 17 for almost two years in Wisconsin for painting graffiti. In 2004, his lawyers helped him demonstrate he had this compulsion, which allowed him not to have to serve time for that second charge. In the aftermath, Chris Peters has taken what are essentially the elements of graffiti, like trespass, vandalism, putting the images on another space and turning it on its ear. Chris finds abandoned and decaying spaces that have very limited access to the public and he, using paint and sometimes just the natural finish of the building, creates camera obscuras inside of these abandoned spaces by blocking the windows, blocking any existing light and drilling tiny holes in the exterior or the boards in the windows. Then using plates, he creates a camera obscura inside to project the city-scape that surrounds the space into the darkest room. Chris time-lapses that using traditional video and photography so you get the sense of the light movement, the movement of the city, but inside the space everyone has kind of forgotten.

I have a dozen large scale photographs of his museum mounted that will be on display. I also have a looping video he created with a soundtrack by Dan Deacon made specifically for this public/private project Chris has done.  It’s really wonderful. You see the clouds moving on the floor; the cars moving on the ceiling.