Origami Exhibit is Above the Fold 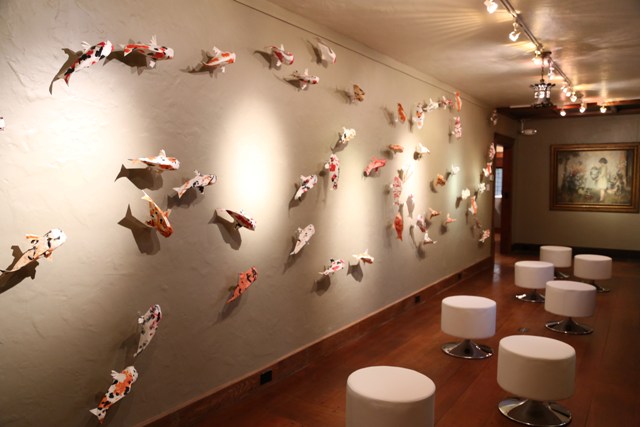 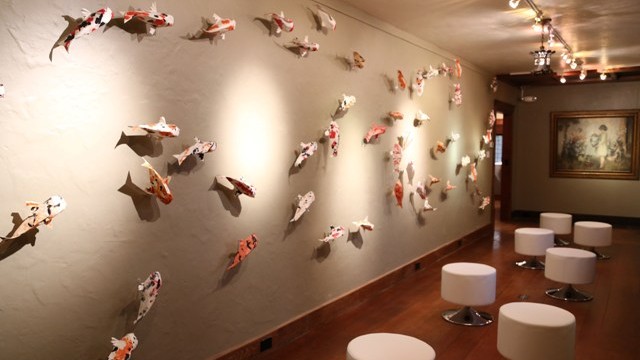 While it could be said that any museum is never quite the same as the day before, the staff and board of “The Herm”—a new moniker that embodies its hipper incarnation—has made a concerted and strategic effort to reinvent itself as a more relevant, more engaging, and more in-touch space in which to honor the past while embracing the present and forging into the future.

That process didn’t begin with the arrival of the museum’s new-ish director, Jen Duncan, but it didn’t predate her my much and she certainly kicked it into high gear—in fact, one board member dubbed her the “kick a—” new director—infusing the somewhat dark, intimate and library-like space with new life and, quite literally, light in the case of the Bruce Munro: Light exhibition this past winter.

At the risk of sounding corny, the current exhibition in which origami, the ancient art of paper folding, has been re-imagined as large-scale conceptual sculpture, wall relief pieces, and installations is an apt metaphor for the museum.  The Herm has, depending on your perspective, either folded or unfolded itself into a new expression of its long-time mission.

Lest origami seem somewhat of an arbitrary choice, the museum’s original owners, William and Florence Sloane, built their late 19th century Arts and Crafts style mansion as a private home and an eventual public museum to house their collection of fine and decorative art numbering at around 5,000 objects and spanning as many years.  While the collection represents some 30 countries, Asia maintains a notable presence, with many pieces from China, India, Japan, and Thailand, a fitting context for an exhibition of origami, which began in China, but became synonymous with Japan, and is now practiced internationally, including by the nine paper artists in Above the Fold.

As of the current exhibition, The Herm has now partnered twice with Betsy Hardy and Hardy’s The Art of Jewelry to mount a small companion exhibition of wearable art—or jewelry as sculpture—that explores similar materials, forms, and ideas as the main exhibition.  With the work tastefully installed as art, this approach adds another welcome dimension to the viewing experience.  For Above the Fold, Hardy chose pieces from Kate Cusack’s Hipper Zipper collection: bold statement pieces made of zippers that fold, twist, and undulate not unlike origami, especially the work of Erik and Martin DeMaine located just down the hall.  Though the black, white, red, silver, and gold jewelry is all for sale, the commercial aspect is fittingly downplayed.

For Above the Fold, another new twist, if you will, takes the shape of an integrated furniture exhibit and online auction by Decorum, Norfolk’s premier purveyor of contemporary furnishings.  Owners Claus Ihlemann and Robert Roman sat down with a team from the Hermitage to curate pieces of furniture to pair with specific works in the exhibition.  The resulting visual conversations call attention to the materials, forms, or ideas embedded in the work while also providing comfortable and stylish gallery seating.  Yes, one dimension of this aspect of the exhibition is marketing-related; however, all proceeds from the auction solely benefit The Herm.  The auction labels, though clean-lined and professional, look a touch commercial.  But they need to be somewhat obvious in order to insure the success of the auction.  As such, it could be argued that the intrusion of a little tasteful commercialism seems a small price to pay, if you will pardon the pun.

In the entrance hall or Central Gallery, Vincent Floderer’s suspended “Unidentified Flying Origami” enlivens the space with exquisite forms suspended by wires from the ceiling.  Shaped from crumpled paper in rich earth tones and inflated, the forms were inspired by micro-organisms, but are reminiscent of fanciful pods and fish that gently sway in response to natural air currents.

Upstairs, in the second Changing Gallery, Nishimura’s “Wave” mesmerizes with its intricate stretched and compressed “Op Art” diamond pattern that—if one looks long enough—reveals an embedded wave.   Here, her work is paired with that of Erik and Martin DeMaine.  Their five “curved crease sculptures”—two inside blown glass vessels—read as expertly accordion-folded paper that has been coaxed and relaxed into sensual interconnected arcs, the product of both human intervention and the properties of the paper itself.  Again, a pair of slat style benches, these called the Novel Stainless Steel Double Bench, echo the ribbon-like appearance of the folds in the surrounding sculptures.

Around the corner in the East Gallery is “Pentasia” by Robert Lang.  Folded from 500 squares of paper in tones of olive-gray and gold, this piece, with its complex geometry, is vaguely reminiscent of a model for a fanciful domed Islamic ceiling held aloft by columns.  Painted on the circular base or “floor” is a mathematically related design in compatible values of gray with crisp black contour lines.  The piece is perfectly situated in one of the museum’s architectural niches whose shape echoes the polygonal structure of the sculpture.  Just in front, White Net Chairs with their shaped white leather seats and stainless steel backs that appear derived from a curved algebraic grid capitalize on the mathematic structure of Lang’s piece.

Upstairs in the Painting Gallery, “Vertical Pond II,” a very different piece by Lang, animates the gallery with a school of origami koi—perhaps a little less graceful than one might hope—running the length of the long, narrow room and wrapping around one corner.  Little imagination is required to read the long, narrow row of cylindrical Plump White Leather Ottomans on revolving stainless steel pedestals as lily pads on the surface of the koi pond.

Downstairs in the Gothic Drawing Room, Clear Anime Chairs, traditional oval back chairs reimagined in clear acrylic, not only echo the material used by Miri Golan for some of her sculpture stands, but instantly signal the everything-old-is-new-again foundation of the show, as does the Bright Lights orange shag rug beneath Richard Sweeney’s graceful suspended white sculpture, “Air.”

Golan, who created the Israeli Origami Center and Folding Together, a program that brings together Israeli and Palestinian children in the Jerusalem area to create origami, refers in abstract ways to religious texts—included the Torah and the Koran—in both scroll and book form, symbolically linking the two.  Her blank pages seem to suggest a new history of tolerance, yet to be written.

In the Great Hall, Jiangmei Wu’s monumental floor-mounted “Ruga Swan”—whose abstract wingspan is almost too large for the space—is so elegant and graceful as to belie its humble material of corrugated board.  The Drop Stools, rigid bean bag-type seating in black, white, apple green and red, punctuate the space but perhaps a bit randomly.

Upstairs in the first changing gallery, a clean-lined, 2-sided, 4-part installation by Paul Jackson combines photography with a woven paper technique in order to create poignant large-scale images of the fronts and backs of the artist’s hands in intimate, hairy, and wrinkled detail.  Each image reads as enlarged pixels by virtue of Jackson’s technique in which he weaves together strips of printed photo paper in uniform widths.  Curvy upholstered red, black, aqua, and pistachio green Lund Arm Chairs serve as counterpoints to the geometric architectural appearance of the installation.

All told, Above the Fold serves as a metaphor for the revitalization of The Hermitage in that the ancient, yet still relevant, material of paper and the similarly ancient art form of origami are here reinvented as ground-breaking contemporary sculptures that nonetheless pay homage to the historical past.  Similarly, the museum’s collection of objects, reaching around the world and back thousands of years, serves ever more emphatically as the context and catalyst for the exhibition of artistic expressions and explorations that are global and current, yet reach both backward and forward.

Above the Fold: New Expressions in Origami

Above the Fold: Exhibit Furniture Auction by Decorum Furniture (online)

To bid, go to www.32auctions.com/abovethehold

All proceeds benefit The Hermitage Museum.