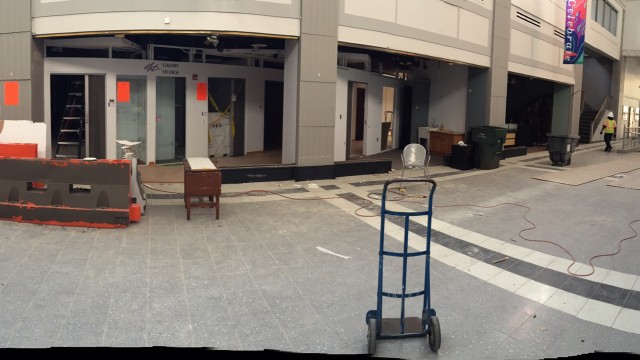 On April 18, VEER Magazine reported d’Art Center and Selden Arcade would be closed for 5 to 6 months after a gas-line explosion left the interior of the Norfolk landmark damaged, displacing dozens of resident artists, the city’s Cultural Affairs Office and Bureau of Special Events, closed the Cuisine and Company site and part of the Children’s Section in the Slover Library. . As it turns out, it’ll be a bit longer than expected.

“The City has told us it is 4 to 6 months out before we will be returning,” said d’Art Center interim director, Anne Odell.

According to d’Art Center communications director, Amy McKay, “The Selden Arcade is now a bonafide construction site. Artists are still allowed in twice a week on the set schedule for two hours each time, but, now we wear hard hats to access our materials. Construction will likely go into the holiday season.”

Norfolk city spokeswoman Lori Crouch said the city has spent $500,000 so far in “stabilization” and has yet to determine the final cost on reconstruction.

More positive vibes: The Harbor Group offered free, high visibility studio and display space to several artists on the first floor of the PNC Bank- 555 West Main Street. Sid Bridges, a father of one of d’ART’s fantasy art students and marketing director for The Harbor Group, reached out with a huge helping hand after the explosion.

“With Sid’s assistance and many others at Harbor Group including Brooks Crowley and Krista Marshall, The d’ART Center is able to present Cutting Edge 2015: Contemporary Glass in Norfolk,” said McKay. “It is an exhibition of the latest work created by the Chrysler Glass Team. We will be at PNC until August.”

Additionally, Matthew Fine has generously offered his gallery, OKAY SPARK on Boush Street for an d’ART Center exhibition- the first d’ARTists exhibition since the accident.

Both Cutting Edge and OKAY SPARK are exhibitions that are free and open to the public.