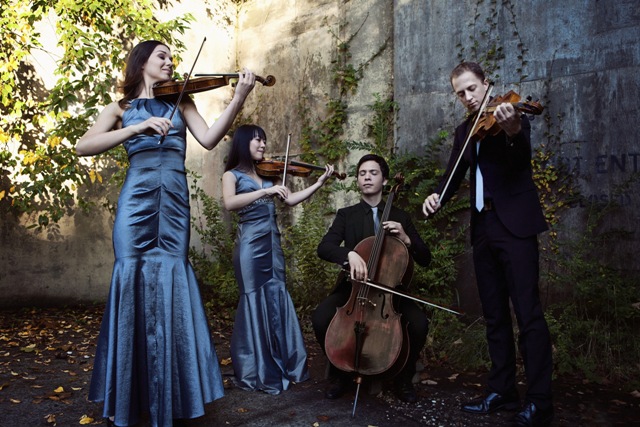 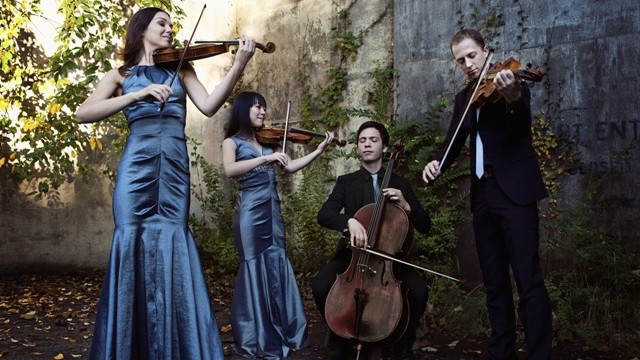 Attacca String Quartet is a must-see May 7 at St. John’s Episcopal Church, Portsmouth

Coffee Concert I, May 7, introduces the Attacca String Quartet, whose violist Luke Fleming chatted on the phone about the group and that concert.

The word “attacca” is pronounced with the emphasis on the second syllable, which has a broad “a,” and has two meanings, he explained. The first is “attached” or “linked;” the second means to attack immediately. (As in, to play two movements of a piece without a pause between them.)

The group takes its name from the first meaning, he said, since the members of a chamber group are tightly linked to one another whether playing, practicing or touring.

Since their 2003 start at Juilliard and ‘07 pro debut, Attacca has racked up a host of international awards and honors, become Quartet in Residence for the Metropolitan Museum of Art, and are well on their way in a very ambitious, multi-year project.

It’s called “The 68.” That’s how many string quartets the fabulously prolific Franz Joseph Haydn wrote, all of which the Attacca Quartet will perform in a self-produced series.

Unsurprisingly, they kick off CC#1 with a Haydn. It’s his String Quartet Op. 54 no. 2, “very experimental” (for 1788), a work to which Haydn’s use of gypsy music gives a sense of improvisation.

The Quartettsatz in C minor of Franz Schubert – “as eloquent and elegant as can be”– is next on the bill.

The concert’s finale, Antonín Dvořák’s String Quartet No. 12 in F major, Op. 96, known as the “American,” while “full of charm and good humor,” also reveals the Czech composer’s “longing” for his homeland when he was working in the US, even as it conveys the ”sense …of grandeur” with which the Great Plains impressed Dvořák.

Petrova’s previous Arts Festival concerts have built her “a following” here, says VAF Chamber Music Director André Michel Schub of his former student; her husband is “a fantastic pianist and one of the most brilliant people I know,” Schub adds.

After Andé Jolivet’s brief, ethereal Petite Suite for Flute, Viola, and Harp, Petrova and De Soluan join to play Erik Satie’s mysteriously titled display of virtuosity in both discord and sweet sounding conventionality, Trois Morceau en forme de poire (“Three Pieces in the form of a pear”), a piano work for four hands, in seven movements. The concert closes with César Frank’s Violin Sonata in A Major for Violin and Piano, which Schub calls “one of the great lover’s works in the repertoire.”

Schub, a world renowned pianist in his own right, joins Petrova and DeSoluan in “Pianopaloza” (Coffee Concert III), May 14.

That’s where they will spring their surprise, about which Schub will only say, “All three of us will be involved.”

That surprise fits in somewhere with Mozart’s Andante with Variations in G major, K.501, another piece for four handed piano; Camille Saint-Saens Variations on a Theme by Beethoven, Op. 35 for two pianos; and Rachmaninoff’s Suite No. 2 for 2 Pianos, Op. 17.

All three composers were themselves superlative pianists. Schub calls the Mozart “a great little masterpiece,” the Saint-Saens a “more than lovely … virtuoso work,” and the Rachmaninoff simply “wonderful.”

Coffee Concert IV, May 21 in Williamsburg, brings together Schub, harpist Chapman, flutist Debra Wendells Cross, Sherie Lake Aguirre on oboe, Michael Byerly on clarinet, Kimberly Gilman on horn and Laura Leisring on bassoon – all from the VSO – for another of “Mozart’s masterpieces,” as well as an Astor Piazzola tango that “is bigger than just music,” and a sextet that combines “the fun of a nightclub” – “almost like a can-can” at one point – with the “religious and spiritual side” of composer Francis Poulenc.

The Mozart is his Quintet for Piano and Winds, K. 452, which the 28 year old composer apparently called “…the best thing I have written in my life,” though of course he turned out quite a few great works afterwards.

The Piazzola Histoire du Tango is arranged for flute, harp and viola. Schub says “It evokes all the passions of life,” immediately adding, “but I would say that about all great music.”

Poulenc’s Sextet for Wind Quintet and Piano in C, FP100 is “one of his most successful pieces,” Schub says. Mixing “the fun of a nightclub” and “kind of, almost, a decadent side of him” with his “religious and spiritual side,” the Sextet is not only “the major work for the combination [of instruments],” but both “lots of fun” and “very beautiful.”

Hampton Roads’ first look at one highly regarded Early Music group, the five year old Quicksilver Ensemble, wraps up the Festival’s 19th season of Coffee Concerts May 22 at the Williamsburg Winery. Quicksilver’s high standing is evident in carefully phrased comments such as the New York Times’ praise for their “ impeccable, soulful playing … and fine-tuned ensemble work” and the Early Music America review that said “their playing is drop-dead gorgeous with a wonderful interplay of timbres,” as well as in the reaction of a NYC blogger who said “they really rocked” and The Times’ (again) remark that “they are revered like rock stars within the early music-scene.”