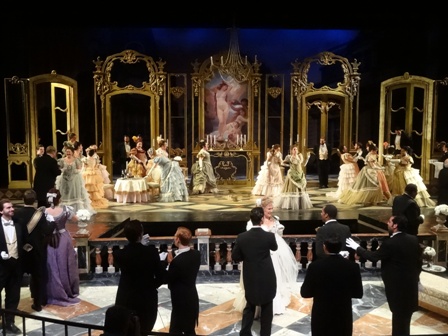 : The exceptional party scene from La Traviata. Photo courtesy of Des Moines Metro Opera in a co-production with Virginia Opera

What can you say about a beautiful young courtesan who dies?

Well, oodles of folks have been saying – and singing and even dancing – quite a lot of things about one such star-crossed lass, variously named Marie/Marguerite/Camille/Violetta, since 1848. That’s when French novelist and playwright Alexandre Dumas turned out what has been called “a weeper” of a romantic novel, The Lady of the Camellias. (Known as “Dumas fils,” he was the out-of-wedlock namesake son of the super-humanly prolific writer referred to as Dumas père, author of The Count of Monte Cristo, The Three Musketeers, etc.)

Marguerite Gautier is the heroine of that novel, and of the play into which Dumas fils transformed it in 1852. She’s a courtesan, which is to say a very expensive escort, a lady of negotiable affection for whom negotiations start very high.

She has tuberculosis, known then as consumption.

The fictional Marguerite was closely based on the real Marie Duplessis, a lover of Dumas fils, a courtesan to nobility and the self-educated epicenter of intellectual and artistic salons.

The novel was a hit, the play was a hit, and since the intersection of youth, romance, beauty and death make for a plotline that reliably wrung hearts before Methuselah was teething, the story spawned generations of other plays, movies, ballets and most notably, Giuseppe Verdi’s opera La Traviata, with which the Virginia Opera Association closes its 40th Anniversary Season.

(Not coincidentally, La Traviata was the opening show of VOA’s first full season, at what was then the Norfolk Center Theater. Wholehearted praise in a New Yorker magazine review served notice that a very promising new troupe had joined the community of regional opera companies. Romantic leads Diana Soviero and Raymond Gibbs went on to careers in New York that included the Metropolitan Opera for both; both are highly respected voice teachers today. Bass-baritone Jake Gardner still maintains an active international singing career, repeatedly returning to Norfolk. This year he was Judge Turpin in VOA’s Sweeney Todd and Sir Joseph Porter in Pinafore. )

Verdi and his librettist Francesco Maria Piave renamed Dumas’ consumptive heroine Violetta Valéry. She falls in love with young and not especially wealthy Alfredo Germont, and they depart the social whirl of Paris and her less-than-respectable life of hedonism for bucolic and non-commercial monogamy in an idyllic country home. Actually, she’s secretly supporting both of them by selling her jewelry.

Alfredo’s father, Giorgio Germont, visits in Alfredo’s absence, asking Violetta to give up his son to remove the scandal with which their romance has tainted the Germont family name, so that Alfredo’s sister can make the socially acceptable marriage she has been offered.

Violetta sadly parts from Alfredo without telling him she’s sacrificing her happiness for the good of his family; they cross paths later at a party when she is on the arm of the wealthy Baron who had been her lover before Alfredo came along. The self-perceived-as-jilted young man’s temper flares, he insults Violetta, embarrasses himself, gets himself challenged to a duel and storms out in anger.

In the final act Violetta is bedridden. Germont père has told Alfredo why Violetta left him; Alfredo arrives, they re-express their love, and she dies.

The story “has everything,” says Lillian Groag, Stage Director for the VOA production, “sex, a love story, a clash with parents,” “a beautiful women who dies,” an “incredible act of self-sacrifice,” and it all happens in an “extremely glamorous” and “upscale environment.”

Though the top courtesans of the 19th Century became “incredibly wealthy” and “lived ..lavishly,” Groag points out, they “could not be received” in proper society.

Violetta’s sacrifice of the one love she has truly felt, for the sake of her lover and of his family’s reputation, especially interests Groag. “She’s willing to die today so that he can thrive and his sister can get married.”

Groag directed Traviata for Des Moines Metro Opera last summer – this is a co-production of VOA with DMMO. Her staging will “tell the story straight,” she says, using “a very lyrical abstract of what those [wealthy courtesans’]  houses must have been like.” (Photos of the Des Moines production show a suitably gilded and lush look.) She has also “peopled the stage with the ghosts of dead courtesans,” a touch that drew praise from Des Moines reviewers for its imaginative power.

Groag’s thoughtful directing for the VOA over some 20+ years has made her one of the company’s most reliable and creative “go-to” directors.  For herself, she says she “loves coming back to Virginia.”

The director is also an actress and playwright. Not only does she bring the sensibilities of those two facets of her theatrical career to her directing, but one of the plays she has written is titled Ladies of the Camellias. Note the plural; it’s a very witty fictionalization of a real incident, when the two great 19th Century celebrity actresses, Eleanora Duse and Sarah Bernhardt, crossed paths when both were playing … Marguerite Gautier.

Mlle. Duplessis died, but she has achieved something like earthly immortality.