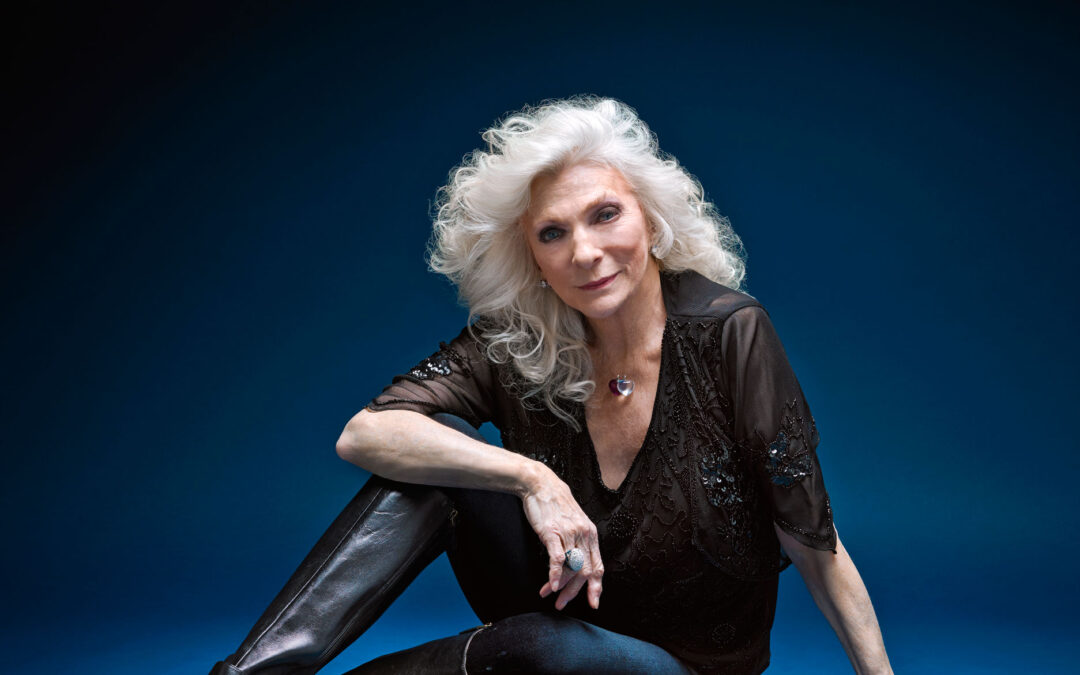 Singing to an empty auditorium isn’t so hard if you ask Judy Collins.

The Virginia Arts Festival recently commissioned a live concert featuring longtime folk music recording artist Judy Collins for a virtual performance from Chrysler Hall in Norfolk. Fans around the globe can watch the show October 23 and 24 via vafest.org. Joining her onstage as the backing band is award-winning Americana group Chatham County Line.

The Chrysler Hall performance was recorded in late September. For Collins it was a welcomed reprieve from life in lockdown.

“It was great to get out of New York and drive down,” she said. “We stayed at the Hilton (The Main) which was squeaky clean and everybody was properly distanced and wearing masks.”

Noting that throughout her 60-plus year career she’s performed numerous times on television, Collins was not phased when it came to playing in front of empty seats with only a film crew on-hand at Chrysler Hall.

“My father was a great performer and always said, ‘It doesn’t matter how many people are in the audience. If there are two people one of them could be the Queen of England,’ so we were always trained to treat every performance in a completely professional way,” Collins said.

Judy Collins is perhaps best-know for her version of Stephen Sondheim’s “Send in the Clowns.” It was a Billboard-charting single for Collins from her best-selling 1975 album, “Judith,” earning her a Grammy nomination for Best Female Pop Vocal Performance and scoring a Grammy Award for Song of the Year.”

For her Chrysler Hall concert, Collins shared with Veer Magazine her approach to the songs listeners and viewers will experience.

“I have a rule about I sing and how I sing it,” said Collins. “My intension is to bring beauty and joy into people’s lives. I have had a mixture of many different kinds of songs over my career, but my most essential need is to make people look at themselves and realize they are the answer to their problems and that they have the control over what to do and what to think, and that beauty and art are the the things that keep them alive.”

The virtual concert will feature Judy Collins front and center with Chatham County Line serving as her band. There will be a couple songs Collins performs solo at the piano and the instrumentalists will have a tune or two to spotlight mid-set on their own.

In recent years, Collins released recordings she had long wanted to make. In 2017, she collaborated with former boyfriend Stephen Stills on a 10-track album titled “Everybody Knows,” which was supported with the two singer/songwriters on tour together.

Collins shared with Veer Magazine she believes Stills will “never go back out on the road again, knowing what I do about Stephen and his health.” She said he seemed perfectly at peace at the end of their tour “going out on top” as Still expressed to her.

From the “Winter Stories” album, “It has songs I was always longing to do,” Collins said. “Like the ‘Highwayman’ and ‘Northwest Passage.’”

Collins and band performed a lengthy concert at Chrysler Hall, thought it will be up to the film editors to determine which songs will be included in the virtual show. Still she has some she’s lobbying for to be included.

“I’m not sure what our time requirements are,” said Collins, “but I hope we don’t lose ‘River’ by Joni Mitchell.’ I don’t have control over that.”

Judy Collins has recording countless songs over her career, a mixture her own but mostly of tunes written by others with an obvious affinity for the works of Mitchell, Sondheim, Leonard Cohen, John Denver, The Beatles, and Bob Dylan.

Following are some specific songs recorded and often performed by Collins that Veer Magazine asked her to share her thoughts about.

On Joni Mitchell’s “Both Sides, Now”: “I heard the song in the middle of the night at three in the morning when Al Cooper, the guy who started Blood, Sweat & Tears, called. He was sitting with Joni in her apartment. He followed her home from the club. She told him she writes songs. This was 1967 and Joni was a complete unknown.I knew she was wandering around the Village, but that’s all I knew about her.

He put her on the phone and she sang the song. I said, “Whoopi. I’ll be over in the morning and I’m going to record that song.

Of course, it was a big hit for me and for her, so that was extraordinary. It has been a very important song for my career. It has been a model for me, I think, in my own pursuit not only of finding great songs, but also in helping me make my own songwriting a centerpiece of my career. Between Joni Mitchell and Leonard Cohen I got a lift I really needed into my own writing”

On Leonard Cohen’s “Suzanne”: “That was the first song of Leonard’s that he brought me. It was one of the first songs he wrote. It became important piece in my history but also in his because, as he said to me, that recording of me singing ‘Suzanne’ made him a star. I was very grateful and so was he.”

On Stephen Sondheim’s “Send in the Clowns”: “I was sent the album, ‘A Little Night Music,’ by a friend of mine, who was introduced to me by Leonard Cohen a few years before that. She sent me the album in 1973.

“Unfortunately I became a friend of his (Sondheim) in the last four years of his life — sadly he’s gone now.

“Anyway, I called him up when I heard the song.

“I said, ‘You’ve got this great song on this album.’

“He said, ‘Glad you like it. It is is great. About 200 people have recorded that song.’

“I said, ‘I don’t care. That doesn’t at all influence my decision, I have to record it.’

“I’ll tell you a funny story, though. Electra (Records) was ready to put it out at the end on ’74 on my ‘Judith’ album. My record company got a call from Frank Sinatra’s people. And the message was to Joe Smith, who was then the president of Elektra: ‘We would like Ms Collins to hold the release of ‘Send in the Clowns,’ Mr. Sinatra wants it out first — his version.’

“Now, I didn’t know that until Jac Holzman, the founder of Elektra, told me, maybe two years ago. I was really shocked. I loved to know that.

“And Jack said, ‘Well, you know what I have to say to that.

“It was nice to have Mr. Sinatra’s attention to bump me off.”