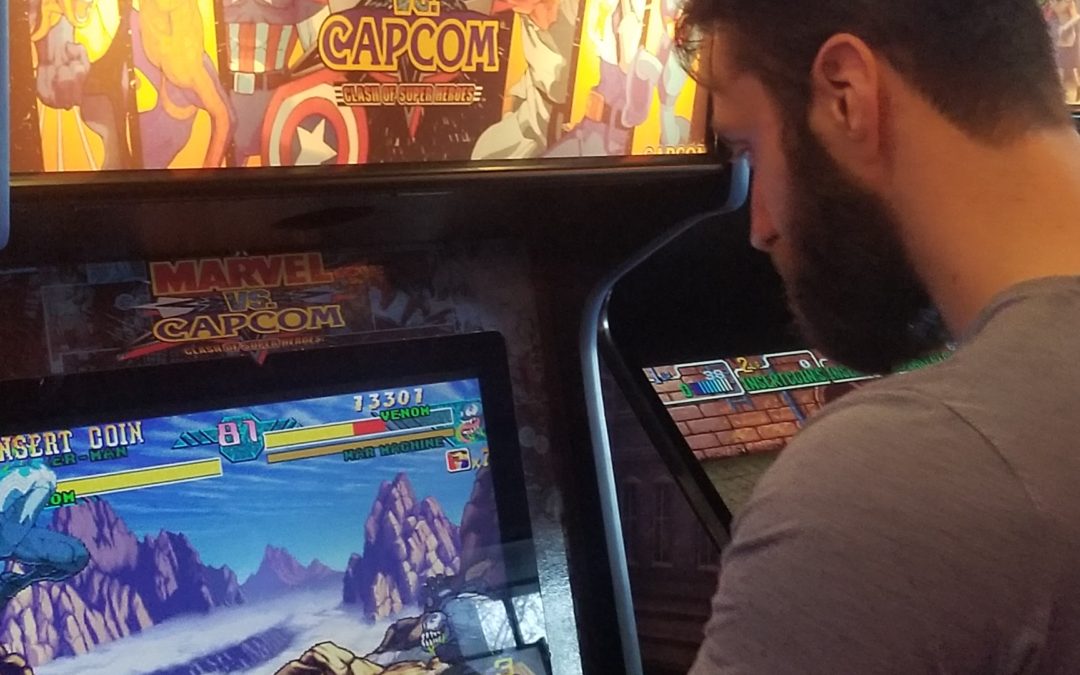 When I first heard Norfolk was going to soon gain a bar-arcade (BARCADE is trademarked), I was excited. I have fond memories of blowing through quarters at Aladdin’s Castle and Flipper McCoys, but I also remember how expensive Jillian’s and Dave & Buster’s turned out to be.  Would the new bar-arcade be like the latter? Or would it be a watering hole that offered nostalgia for an affordable price?  I easily talked my Friday happy hour crew into meeting at PIXELS – Pints & Bytes two days after their grand opening.

Greeted with “Virginia is for Gamers” in neon lights, I was amazed at how the old Belmont has been transformed.  With two floors of classic arcade machines, pinball, air hockey, and skee-ball there was plenty to do. I also liked that they offered controllers to those sitting at the bar, so that patrons could play MegaMan X, Super Mario Bros 3, or other games while not leaving their bar stool. The beer prices were affordable, the food was tasty, there was a full-service bar, and I was able to put five dollars on my tab for PIXELS tokens.  I soon blew through all my tokens and needed to replenish.  While the games were not expensive (25 cents to 1 dollar per game), we had to play every arcade machine on the floor and would eventually become locked in an unofficial Marvel Vs. Capcom tournament.  I had a blast.

A few weeks later I returned with a buddy visiting from out of town.  He was envious that this kind of entertainment was not in his own city, and we spent a large portion of that Saturday night not only playing the arcades, but also running into other friends who were already a few drinks deep. Even though the place was packed, I was able to receive service quickly.  I had more fun that second night than I did that initial happy hour, and a lot of it had to do with the bar crowd.

Not long after that, I learned that PIXELS was going to have some new competition: Circuit Social.  Located across from TCC Norfolk, I knew this other bar-arcade would probably provide much of the same, but I was wrong.  Upon entering Circuit Social you must preload a game card with an arcade balance and a drink/food balance.  I thought having two balances was a bit weird but shrugged it off and went toward the self-service taps.  There was a large selection of beer, cider, and wine, but I soon discovered that being charged by the ounce was more expensive than ordering through the bar. Bud Light 16 ounce came to $4.64 and Smartmouth Alter Ego 16-ounce came to $10.08 (tax is already included and no tip for self-service).  I also soon discovered that after 32 ounces you must prove your sobriety to the tap assistant.  As much as some may rave about self-serve taps, I would rather have the bartender.  Aside from the drink issue, the food was spectacular, affordable, and the self-serve kiosk was easy to navigate.

The game selection at Circuit Social was far superior to PIXELS, in that not only are there more arcade machines, but they have Hot Shot Basketball, Max Score Football Arcade, Cruis’n Racing Arcades, and Boomerang Air Hockey.  Additionally, you can reserve a lane for Skee-Bowl, which is reminiscent of duckpin bowling.  The prices of games were also between 25 cents and one dollar, with the newer or more immersive games being more expensive.

Overall both bar-arcades can provide a great time for those looking to mix up their outings with casual (or competitive) gaming, and they will both hopefully bring a new level of excitement to the night life here in Norfolk.  Just remember, it may take more than one visit to achieve a high score.

An avid gamer, Josh Howell of Norfolk owns 12 consoles, and his gaming stretches back to Atari 2600 and  5-1⁄4  inch floppy disks.  He is currently playing Sea of Thieves.