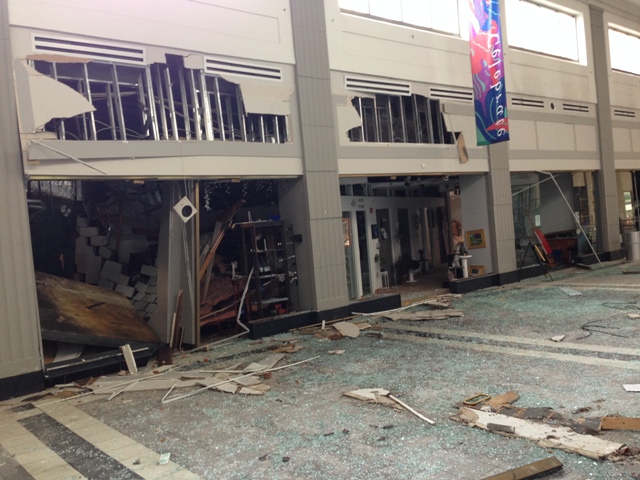 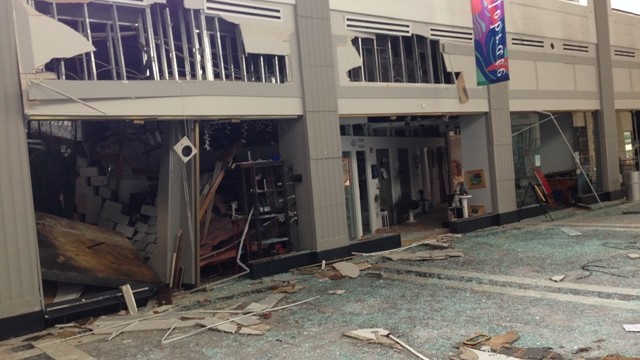 That’s terrible news for those whose livelihoods are directly impacted.

“I had been told it’d be months,” said d’Art Center communications director, Amy McKay, “but it’s a little disturbing to hear 5 or 6 months.”

An explosion rocked the Arcade Friday night, littering the common space corridor with shattered glass and debris. The damage was primarily visible on the interior side of the Arcade closest to the construction site of The Main, the multi-million dollar hotel and convention center under construction. An electrical odor has been detected. Water on the floor in artists’ space indicates the sprinkler system may have activated automatically, but has not been confirmed.

Two artists said lights had flickered numerous times a day or two before.

An investigation is underway and city officials issued a statement Monday saying “We will rebuild,” though no timetable was provided.

Our source said it could be a year before the entire Arcade is operational.

According to McKay, there is “extensive electrical damage” throughout, as well as damage to the heat/AC vents in the rafters.

In addition to her communications duties, McKay teaches art classes at the center. Like many of the resident artists, she relies on income from d’Art Center to pay monthly bills.

“I am most concerned about the artists’ livelihood and the loss of income,” she said.

A fundraising event for d’Art Center is schedule for Sunday, May 3, from 2-5 PM at Smartmouth Brewing Company.  Donations may also be made at www.d-artcenter.org.