THEATER: Fall in Love with Jack and Louise 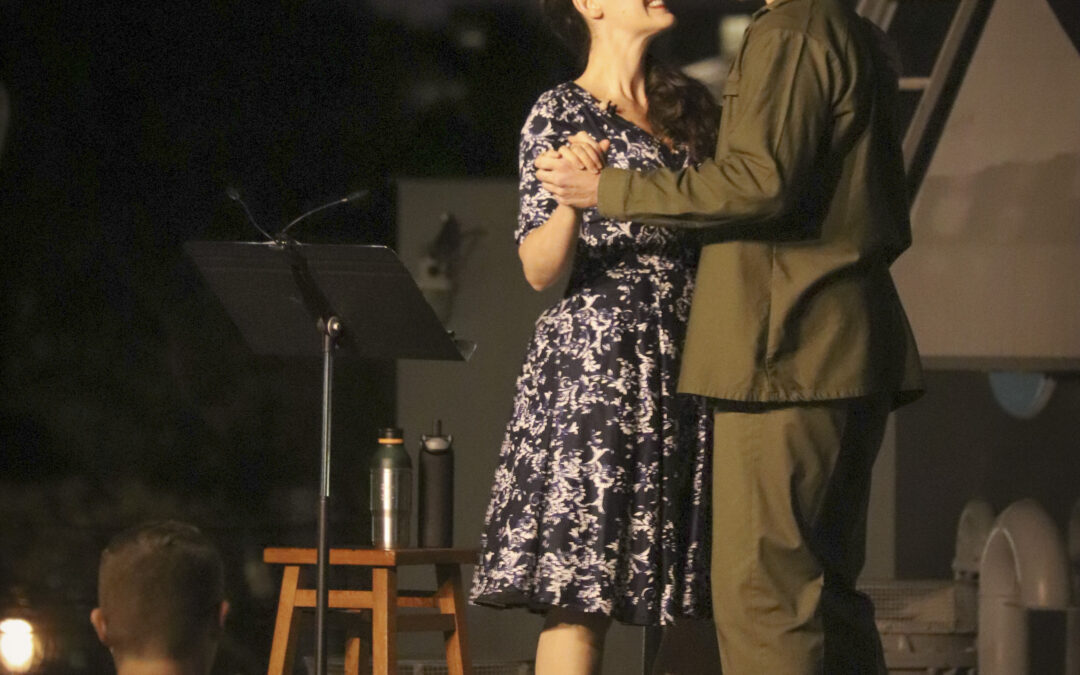 Though there will be mask-wearing, and other pandemic related protocols that patrons and VSC staff will have to follow, live theater finally returns to the Wells Theatre, downtown Norfolk’s legendary gem. Virginia Stage Company will require proof of vaccination, or a negative test result from a Covid-19 test taken within 72 hours of the attending performance. (Please review the theatre’s website for their entry policy.) It’s all intended to keep the public safe, and to not derail the company’s ambitious season 43 offerings that kicks off this month.

Presented in rotating repertory with Jeanne Sakata’s Hold These Truths, Ken Ludwig’s Dear Jack, Dear Louise launches the new season, though due to the extenuating circumstances of the pandemic…it will count, along with Hold These Truths, as the final offering for season 42 members. In any case, the heartwarming play, which premiered at DC’s Arena Stage back in late 2019, is an ideal restart to in-person live theater, following both outdoor and virtual offerings that carried VSC through the most difficult periods of this ongoing pandemic.

Dear Jack, Dear Louise is a theatrical love story, and a love letter to the playwright’s parents, for whom the story is based upon. Set in the 1940s during the tumultuousness of World War II, Jack, who is an Army doctor serving in the war, begins a courtship with Louise, an aspiring Broadway actress, solely by letter. This follows the real-life courtship of Ken Ludwig’s parents, who apparently wrote each other hundreds of letters during the war. Over the course of the play’s two acts, we get to see the fascinating arc of their relationship, through both its joys and challenges.

In VSC’s local premiere, full production of Ludwig’s play, which follows an earlier staged reading of the work, Jack and Louise are portrayed by Dan Fenaughty and Larissa Klinger, respectively. What’s interesting is that the NYC based actors are a married couple, who share with me during my recent chat with them that they actually courted via letter writing as well, during the early phase of their relationship, when acting roles would lead to periods of lengthy separation. Of course they also stayed connected through texting, emails and phone calls as well, but for both of them, writing each other actual letters became a clear expression of their love language.

“When you receive a well-written letter, with beautiful penmanship…it’s a very powerful, affecting medium,” says Dan. “And she’s got great penmanship…I mean that’s why I married her,” he jokingly adds. “We met during a show,” Larissa tells me earlier. “And it’s been so lovely to continue to work together, over the years that we dated and have been married.”

At the time of our interview, they are knee deep in rehearsals, which though going well, always comes with its share of stresses. For Larissa though, being able to even just perform again, following the turmoil of this pandemic, which amongst so much more, led to live theater—both regional and Broadway—largely shutting down for over a year. “In this instance, it was taken away from us. And obviously we felt a very deep and painful loss of it, during the time that it was not an option to work,” she says. “Now that it’s back, I would say that you’re always filled with a lot of gratitude…but now it just makes you appreciate every little moment, just a little bit more.”

Dan notes though, that there are still impactful changes to their creative process as thespians, due to pandemic related restrictions enforced by Actors’ Equity, of which they are both members, and guidelines put in place by theatre companies themselves. “It’s very challenging. We are allowed to not rehearse with masks when are on stage, but everybody else who is watching us, is masked,” he says. “So you’re really trusting yourself, and the work that you’ve put into it, now more than ever.”

And then in the case of this production of Dear Jack, Dear Louise, its acclaimed director, Seema Sueko, is also directing Hold These Truths at the same time. This is the first time that VSC is presenting two plays in rotating rep. They both represent strikingly different theatrical takes on World War II. I ask the couple what it’s been like working with Seema, especially under these unique circumstances.

“She is open and generous, and so kind…” Dan says. “She is pulling double duty. We are so grateful to her for being able to take care of our show, and then have a quick dinner break, and then go into Hold These Truths, which is a completely different beast.” Larissa adds, “She’s an incredible artist, but she’s also just an incredible human being.”

Launching this new season with a show that organically illuminates military service, is both smart and ideal considering our Hampton Roads locale. Larissa was actually already quite familiar with our area due to her many years performing with the USO Show troupe. For both actors though, this play marks their VSC debut.

“It’s a well written and crafted story, of two people finding each other, connecting, and keeping the connection alive, no matter the circumstance,” says Larissa. “And I think a lot of people will resonate with that, especially after the last year and a half.”