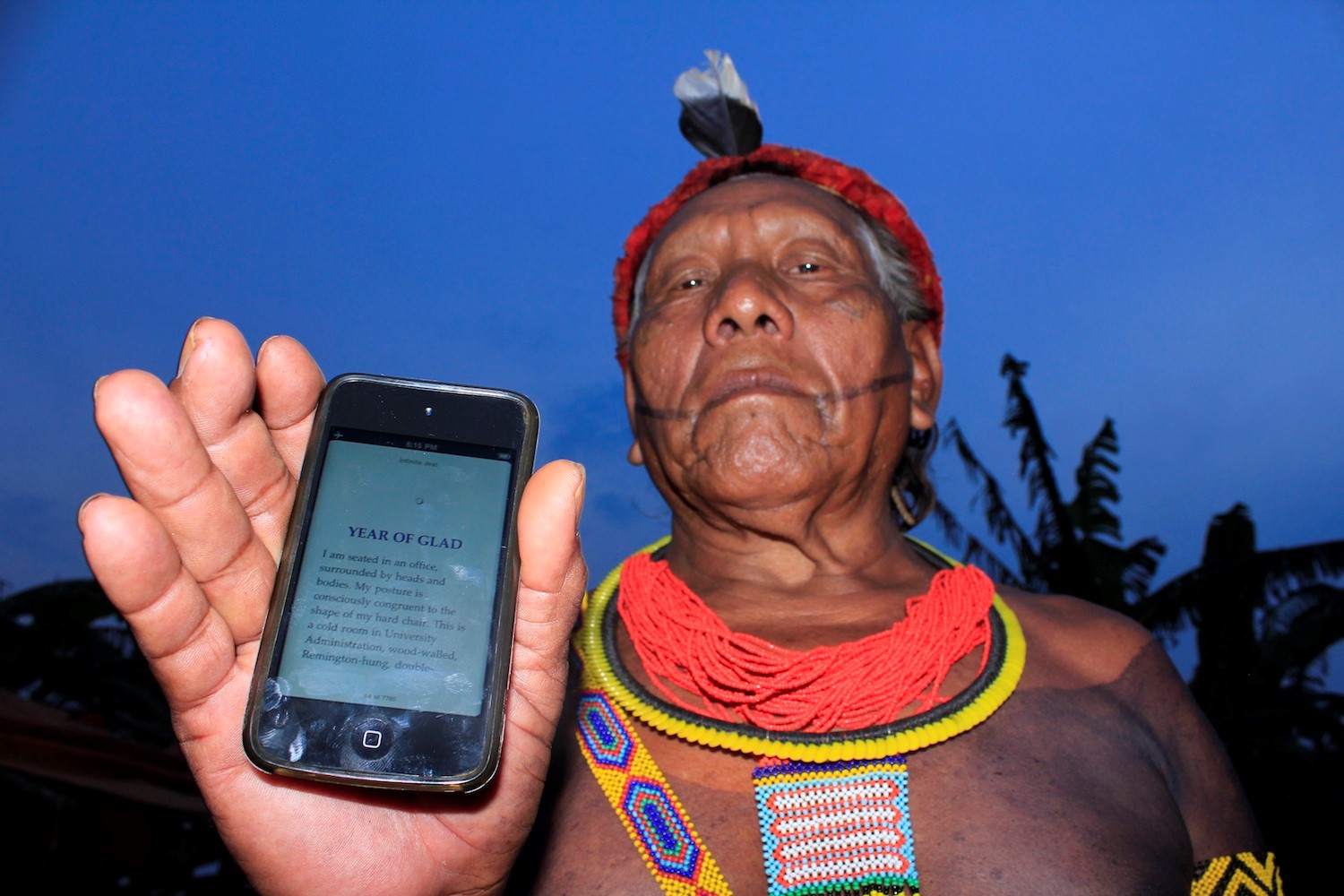 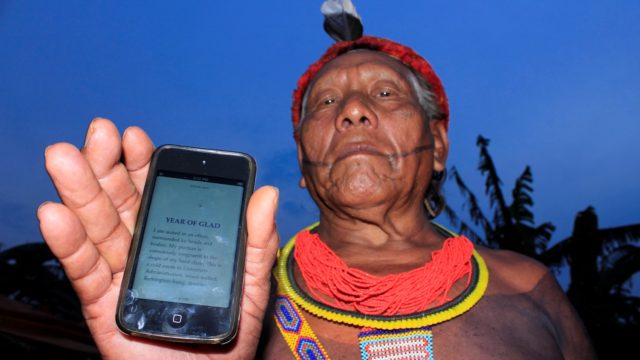 A colorful collection of photographs exhibited by Williamsburg’s Linda Matney Gallery (LMG) titled “ANCIENT TRADITIONS, MODERN LIVES: Amazonian Indigenous Peoples in the 21st Century” is really quite something to view as it provides a unique glimpse into the world of people who aren’t as primitive in their thinking as one might expect.

Curator, photographer and LMG owner John Lee Matney was good enough to share some insights into the exhibit, which is a departure from the gallery’s focus on dramatic contemporary art.

How did the Amazon exhibit come together?

Glenn Shepard and I have been friends since second grade. When I was a teenager, I was very involved in photography. I had a darkroom, developed my own film and prints, and I brought Glenn along into my hobby. We used to go out on photo “expeditions” around the neighborhood or in the countryside with my relatives in Danville. I became a professional photographer and Glenn went off to the Amazon, where he used those photography skills to document his scientific and anthropological work. He even worked on some big-time documentary productions, like a Discovery Channel film that won two Emmys in the ‘90s. But we stayed in touch over the years, he would sometimes help me on my commercial photography shoots, and we have done some video art projects together, and we always shared our photography with one another. I noticed that some of his pictures, in addition to their documentary value, also have artistic quality. I guess I taught him well. So, we have been thinking for some time how to continue collaborating and bring together these various interests of ours.

This seems like a different style of show for the Linda Matney Gallery. Was your personal interest in photography a factor?

Yes, that’s true, photography has become more front and center for me recently. Especially since our collaboration with William and Mary’s photo department’s Eliot Dudik for the first exhibition of silver gelatin prints created by the students in the school’s new darkroom. One of my friends in Athens, Georgia who was an intriguing photographer and photo subject passed away last year whose work was surrealism. All of sudden photography was more on my mind.

I had incorporated some of Glenn’s photos and ethnographic objects into an exhibit I did in the early years of the gallery. Then last year he showed me photographs and video stills done by a young Kayapo man named Krakrax and some other indigenous film makers he has been training in Brazil since 2009. I was really blown away by the beauty and power of these images being taken by indigenous peoples themselves, documenting the events going on in their daily lives, both in the villages and in their interactions with the outside world. There are even images of them in the capital city of Brasilia, protesting for their rights to their land and culture. So, we thought we could bring together a set of images, some taken by Glenn in his work in different villages, some taken by indigenous peoples themselves, to help spread awareness about indigenous peoples of the Amazon who are keeping their cultures alive into the 21st century. The opening will also be a fund raiser support some of the projects Glenn is involved with in Peru and Brazil, from sanitation and water projects to workshops helping indigenous people learn how to film and edit their own movie.

As a gallery owner, how will you measure the success of the show?

Of course, we’re hoping to receive some generous donations for the non-profit organization Rainforest Flow that is working with us on the event. And we’re hoping we can get more people interested in finding out about the Amazon and helping indigenous peoples there by sharing information, supporting the projects, and getting involved in the work. We have a few works being donated by artists that will be on sale, with proceeds going to support Rainforest Flow. Our target goal for fundraising is $4000 for new camera equipment for Krakrax and $10,000 for a rain water catchment system to increase water supply in Manu. 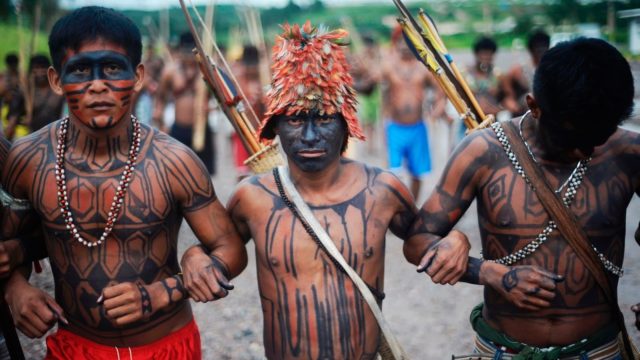 What do you hope people take away from seeing the exhibit?

Our main message is that indigenous peoples of the Amazon are alive and well in the 21st century. We hope that people will respond to the beautiful photography but also get a chance to see indigenous culture through indigenous peoples’ own eyes.

Do you see the modern world coming in contact with the people of the rainforest as a good thing for the indigenous population?

There are lots of myths about indigenous people of the Amazon. Savages, cannibals, lost in time since the Stone Age. There is this idea that indigenous people have to remain static and unchanging for their culture to be authentic. But the opposite is actually true. Cultures have to be resilient and adaptive or they will simply die out. Many indigenous groups are now in frequent contact with outsiders and the cash economy, adapting to Western technology, and requiring more inputs from Western medicine and modern sanitation technology to keep their health as their populations grow and become more concentrated around government-sponsored schools and health clinics. People see an indigenous person wearing Western clothes, a wrist watch, using a video camera, and they say, “Oh well, they’ve lost their culture.” But what we want to show is that Western technology, health care, village sanitation, when done in a way that respects local culture, that empowers people and encourages their won cultural creativity, actually helps indigenous people flourish.

How did you come to learn of the work of the non-profit Rainforest Flow?

Glenn has worked with Rainforest Flow since 2003, and we have been talking for some time about how to support her organization through an art exhibit. Nancy Santullo, the founder and director of Rainforest Flow, was herself a fashion photographer in Hollywood before she left that highly lucrative but superficial scene to go to the rainforest to help out indigenous people. She met Glenn down there, and he helped her with the social and cultural aspects of the health and sanitation projects, bringing naturally filtered clean water and sanitary bathrooms to indigenous villages that were suffering from some pretty severe health problems due to contaminated water, after government schools and missionary outposts had settled them in more permanent communities than they were used to. So between Nancy’s work as a photographer, Glenn’s use of photography and film in his anthropological research, and my own interest in art and photography, the exhibit and fund raiser seemed a natural way to bring the beauty of the rainforest and stories about indigenous peoples’ real lives into the gallery in a way that brings them dignity and empowers them with financial help for projects that benefit the communities directly, by people like Nancy, Glenn and Krakrax who know them personally and work there directly.

The exhibition runs through January 27 with a companion exhibit of some of our represented artists’ works including paintings by Kent Knowles, Teddy Johnson, Leigh Anne Chambers, Art Rosenbaum and Catfish Man Michael Suter among others.