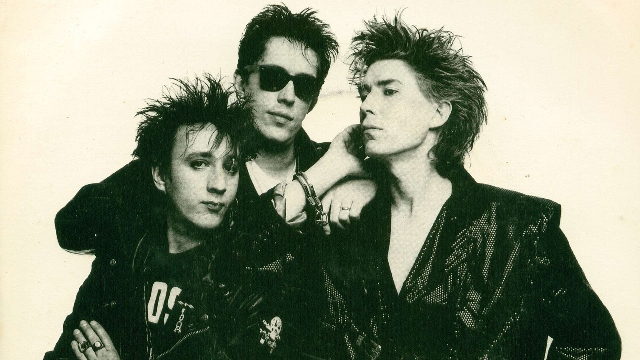 Though John Ashton has decided not to hit the road this go-round with the Psychedelic Furs, I thought he’d be a great interview reflecting on the Furs big time success in the 1980s with such hits as “Pretty in Pink” and “Love My Way.” Ashton, after all, was key to the Furs’ sound and remained with the band even in the early 2000s after they regrouped following a 10-year hiatus. Ashton also has a new band called Satellite Paradiso featuring members of Gang of Four, Killing Joke, David Bowie, Dead Boys and more on the self-titled album (Satellite Paradiso).  And on a local note, he is married to Catherine Dewson, a Virginia Beach native.

It should be noted the current lineup of Psychedelic Furs that’ll be performing May 23 at The NorVa includes Richard Butler, Tim Butler, Rich Good, Mars Williams, Amanda Kramer and Paul Garisto. Ashton and the band remain on good terms.

Without further ado, here’s an excerpt from my conversation with John Ashton.

I heard the Furs for the first time on a promotional, sampler record of new music that included “Sister Europe” from your self-titled debut album. What I was drawn to was the dreamy, swirling sound of your guitar work. I couldn’t help but notice some similarity in sound on your Satellite Paradiso recording. Did you strive to create a sound reminiscent of the early Furs records?

Yes, I mean, I think I’ve always done what I’ve done. My sound is usually heavy rhythm guitar and I use effects quite extensively; mostly flangers and a little chorus, which is the “Sister Europe” wobbly guitar sound.  I tend to write in that way. I come up with a rhythm and a line that goes over it. That’s the riff.

On your song “Still,” from the new album, there is a saxophone during the opening not unlike “Dumb Waiters” from the Furs’ Talk Talk Talk album. How important is the saxophone to your sound as well as that of the early Psychedelic Furs?

To me the Psychedelic Furs sound was the two guitars and a saxophone. Roger and I played really well together. He was in the band before I was in the band. I joined on my 21st birthday in 1978. The sound of the Psychedelic Furs, for me, was that classic period of the first two albums. The intertwining of the melodic lines was what defined that sound. So somewhere between the Velvet Underground, a little bit of Roxy Music and the aggression of the punk music we had grown up with like Iggy & the Stooges, MC5, and then later the seedy punk of London in the mid-70s like Sex Pistols, The Damned and all that stuff. We were an amalgam of all those things, and it just came naturally. To me it was the sound that I always missed in the later Furs lineups. We didn’t have saxophone in the later lineups. The classic line is the classic lineup. If you take out any of those elements you’ve messed with the chemistry. I think that pretty evident on the first two albums. The third album, Forever Now, we took a departure in sound. We added cello. There’s a little bit of saxophone. There’s not the interplay of guitars that Roger and I had on our first two albums. The Mirror Moves was a total departure. It was very poppy, not really the signature sound anymore. Then the subsequent albums after that – Midnight to Midnight, we tried to get more of a hard rock edge and it really wasn’t…(pause)…it had some great songs. “Heartbreak Beat” is really my favorite on that album. You know I’ve always gone for the big sound so “Dumb Waiters” has always been a favorite of mine as was “Sister Europe,” “Pretty in Pink.” So I do try to revisit that. On a song like “Angelic,” I tried to write it as reminiscent of “Pretty in Pink.” I think I kinda nailed it in my own way. Incidentally, Mars Williams (current Furs member) is playing saxophone on that, which is kind of funny really. There was never any sax on the original “Pretty in Pink.” There’s only sax on the remake which was done for that movie. And, again, maybe not the right choice. We should have just left it as it was. But you can’t turn the clock back.

Compared to “Pretty in Pink” I thought “Angelic” had a more hopeful, musical vibe. In your choice of chord progressions, what that your intent?

I think so. “Angelic” was the first song that I wrote when I set out to write this album. I had been in a state of flux, post the Furs; what had gone on from 1978 through 1991.

I think what had happen with us (Psychedelic Furs) is we all kinds of grew tired and we didn’t really understand what we wanted to do anymore as a band. When we took that hiatus, which turned into an eight year breakup and Richard had his solo career with Love Spit Love, I wanted to rekindle some of what I had been doing. I didn’t want to become “that guy” that played in the Psychedelic Furs. I didn’t want to be defined by the Psychedelic Furs, although when we got back together in 2000 I did have a bunch of songs that I had written for the Satellite Paradiso album. And try as I might to get Richard involved in writing lyrics it didn’t really pan out. He was more interested in his (visual) art which he pursues quite aggressively these days. He’s more like an artist that has a band. And that’s fine. Everybody has to move and grow and do their own thing. Now it seems Psychedelic Furs are playing the old hits and Richard’s solo songs. I didn’t really want that for myself.  I wanted something that was going to take me to the next level. I’m happy that I was part of something that was really great, but I felt like I still had a career in me. Maybe not in the same way as I had in the Furs, but a career nonetheless where I still write and collaborate with people. I mix and produce for lots of people.

Writing material for Satellite Paradiso, when it became blatantly obvious to me there was going to be no more Furs or no more writing with the Furs, it took on a life of its own. At that point I contacted Roger and Duncan and asked if they’d be interested in playing on this? They said, “Yes, of course, we’d love to.” Then I added to that my friendship with Gail Ann Dorsey and Sara Lee. I was able to feel comfortable with my writing. Gail had been David Bowie’s right-hand gal for ten years; Sara was in Gang of Four and B-52s for awhile. I felt really at home with those guys. When I was playing with them I felt there was a level of understanding and musicianship that I had been used to. A solo effort is really only as good as the people you have around you. I was lucky.

A few years ago I ran into Rob Sacher, an old friend from the days of Luna Lounge in New York City, and I played him my new stuff. He knew I was looking for a singer, lyricist. I had set the bar pretty high by working with Richard (Butler). He’s a great vocalist, has a distinct sound and great lyrics. He (Sacher) introduced me to this guy name Fred Schrek, who had been in a band called The Ancients and later in Crush with Big Paul Ferguson of Killing Joke. I knew I had found my guy. We work really well together.

I thought Fred’s voice was very impressive on your album. His tonality and phrasings are an amalgamation of Ian McCullouch of Echo & the Bunnymen, Steve Kibley of The Church and even Bono of U2. So his vocal “sound,” though not raspy like Richard Butler, will still be very familiar to fans of the Furs because it parallels that era.

Thank you. He’ll be pleased to hear that. To me I know when something is right…The band is still very young. We haven’t really gotten together apart from playing a few shows opening for the Psychedelic Furs last year, which is a very bizarre experience. Watching the band you helped form and wrote songs with and toured the world with, and you’re opening for them in your own band. It was a very surreal experience. It was welcomed. It left me feeling like I was doing the right thing, not disrespect to them. I’m very happy for them that they’re still going and I’m sure they’ll put on a great show at The NorVa. Richard and I just grew distant. It was best that I go on and do what made me happy because I wasn’t happy anymore. And Richard knew that. It worked out. We’re still friends and we still talk. The doors aren’t slammed shut. They’re just closed for the time being.

Whether due to a love of nostalgia or newer groups such as Muse, The Killers or Interpol, there is something about the sound of the 1980s that people of all ages seem to love. Why do you think that is?

The music of the 1980s was really rich in songwriting and very experimental; sometimes to the point of detriment. There’s a lot of cheesy keyboard sounds and drum machines that have littered the course of songwriting from the ‘80s. What really came through as a decade was a sense of song, exploration; wanting to be different. But also taking the elements from the ‘50s through the ‘70s. You can lump-in David Bowie, Velvet Underground, the Rolling Stones, MC5 or T-Rex – we had a lot to draw from. There are a lot of writers from the ‘80s that went The Beatles route, like Squeeze for instance; acts like Elvis Costello or Nick Lowe. Then you had us, U2, Echo & the Bunnymen, Teardrop Explodes – we came from the Velvet Underground, David Bowie and Roxy Music gene school. It’s really what we grew up with as kids. That the amalgamation of our influences.