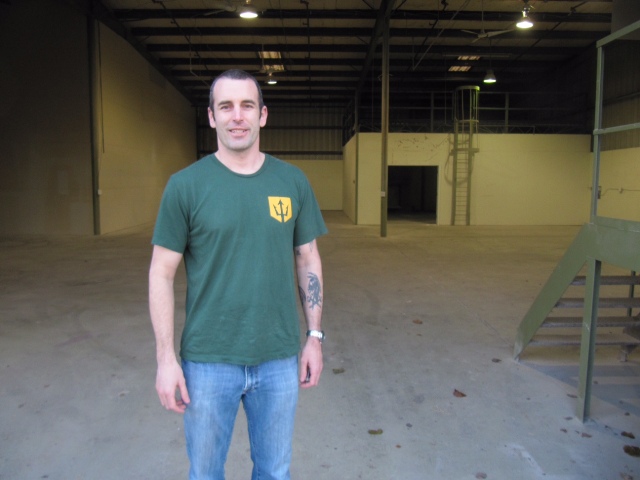 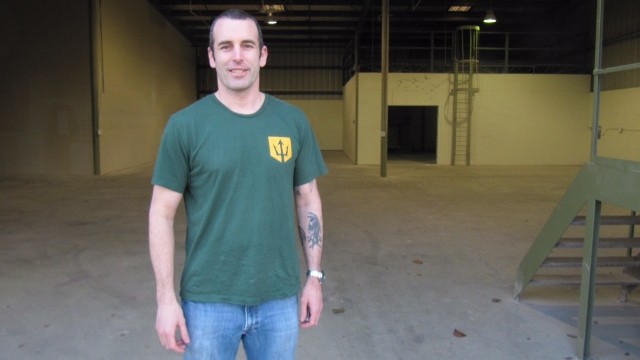 Ah, life in the United States Navy, haze gray and underway.  Periodically while afloat in a boat, the salty sailor gets a hankering for some salubrious suds.  All that time at sea, and you can’t see a malted beverage until port call.  It’s enough to make you wish you were in the English Navy where a proper pint won’t put you in the pokey.

Michael Stacks, Navy veteran, had a hankering, but not just to drink a beer. He wanted to design and develop a beer – he had a case, not of beer, but of wanting to open a brewery. When the beer bug bites it is hard to shake.

He crunched the numbers with his other half, Kerrie, and they decided that a brewery was in their future.  In the spirit of “be bold or go home”, they went bold, and are opening Bold Mariner Brewing Company (www.boldmariner.com) in Norfolk, VA.

Located at 25th Street and Bowdens Ferry Road, the brewery is centrally located between Larchmont and Ghent, and is a short bike ride away from the ODU.

The Stacks started the local beer world buzzing in July 2014 when they launched their Kickstarter campaign to secure some initial funding.  True to their Navy roots, devotees that jumped in early became “plank owners,” recognized supporters of the business prior to its being launched.  Now that their whistles, or more appropriately, boatswain’s pipes, have been wetted for nine months, the gestation period for this brewery is almost over. In February, Norfolk’s Mayor Paul Fraim mentioned Bold Mariner in his State of the City address and this upcoming brewery got on the radar of many folks in the region.

We went to visit their location in March, and Michael gave us the lay of the land.  Right now, the building is an empty warehouse at the dead end of Bowden’s Ferry Road.  Gleaming new equipment will be delivered soon from Deutsche Beverage in North Carolina. The building will be transformed to contain a 10-barrel brew house, and a handful of 10 and 20 barrel fermenters, a tasting area and an outdoor beer garden.  Bold Mariner plans to produce a small flotilla of beers, including a Cascade-accented American pale ale, a hops forward IPA, probably a stout, and anything else that strikes their fancy.  The game plan is to start, much like fellow Norfolk breweries O’Connor and Smartmouth, as draft-only producers, with bottles and/or cans to follow at a later date.

So get ready to enlist your buds and tastebuds, and we’ll see you at the Bold Mariner this summer.

Just a quick mention, but there are a lot of righteous beers in the marketplace right now, including two collaborative efforts involving Norfolk’s O’Connor Brewing Company.  The “Treaty of Ghent” collaboration is a Belgian-style dubbel that they brewed with Smartmouth Brewing Company in a 23507/23517 joint effort.  We plan to take a bottle or two to Belgium this year and show them “our Ghent” is brewing great beer. Well, technically West Ghent and Park Place, but the “real” Treaty of Ghent ended the War of 1812 and sounds better than “Treaty of West Ghent and Park Place” so there you have it. History in the making.

Ghent proper WILL have a brewery however! Coelacanth (SEAL a Canth) Brewing is in the planning stage but will be on 22nd Street behind the Marketplace – two new breweries in Norfolk will be opening in the not too distant future. And there is no such thing as ‘too many craft breweries’. The market is far from saturated as the craft beer fan base keeps growing.

The “Orange is the New Stout” collaboration is between O’Connor and Center of the Universe Brewing Company of Ashland, VA.  A sumptuous stout with sea salt and orange peel added to it, it is pretty close to perfect, and it’s like a Slim Jim, it’s hard to have just one sip. COTU’s Chris Ray says the beer was inspired by those chocolate-orange-filled candies shaped like an orange. You can still get 22 ounce bottles of this dark and delicious beer at O’Connor’s tasting room, and at your local gourmet beer store.