Getting Things Done in Virginia 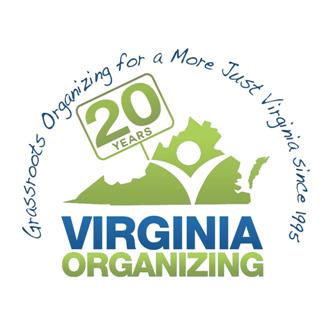 Most of us often feel frustrated and powerless as individuals regarding issues that affect us. We can sometimes feel utterly depressed and beaten by self-serving corrupt politicians and by the idiocy of people around us who are taken in by the judgmentalism, hate and blind nationalism pushed by the right-wing corporate media machine. But giving in to hopelessness is self defeating. We are not powerless. We increase our power exponentially when we work together. We are fortunate that doing so is easier for us because of the coming together over the last two decades of people building an authentic grassroots citizen organization that we have the opportunity to work with.

This year marks the 20th anniversary of Virginia Organizing. As the mission statement on their website states, “Virginia Organizing is a non-partisan statewide grassroots organization dedicated to challenging injustice by empowering people in local communities to address issues that affect the quality of their lives. Virginia Organizing especially encourages the participation of those who have traditionally had little or no voice in our society. By building relationships with individuals and groups throughout the state, Virginia Organizing strives to get them to work together, democratically and non-violently, for change.”

Virginia Organizing began as the Virginia Organizing Project in southwest Virginia in 1995, building local citizen advocacy around issues affecting the most vulnerable. Its first actions were in response to attacks by then Governor Allen on welfare and the social safety net. Their initial focus was on racism and economics education. Other issues they are active in are immigrant rights, health and education, marriage equality, economic justice, working against the exploitation of poor people by developers, banks, landlords, and employers.

This isn’t done by lecturing people or advocating for them from a distance but by organizing and empowering communities to advocate for themselves and by providing support and education. They have learned how to build powerful coalitions and to work within the system and have achieved many real victories over the years. Landmark victories they list include; in 2002 they succeeded in getting the Virginia Housing Development Authority to open its public comment process. VOP and other groups pushed Governor Mark Warner to make major changes to the process of restoration of voting rights, reducing the application from thirteen pages to one for former non-violent felons.

In 2011, victories included moving toxic rail cars parked in Fredericksburg, fighting fracking in Washington County, and opposing predatory lending in South Hampton Roads. Virginia Organizing joined in fighting back a slew of anti-immigrant bills in the Virginia General Assembly that would affect all trying to come to work or study, be they on J1 visas or otherwise. They continue working to raise the minimum wage in our state as well as to expand Medicaid.

There has been a Virginia Organizing chapter presence in different cities in the Hampton Roads region for more than 15 years resourced by dedicated organizers like Cathy Woodson, Ben Thacker Gwaltney and Bev Sell, but the South Hampton Roads Chapter officially began six years ago. Each chapter has “issue teams” and monthly meetings where team reports are read and people coordinate efforts around issues. Issue teams at present include Affordable Health Care, Immigration/Dismantling Racism, Economic Justice and Worker’s Rights, Voter Participation and Restoration of Voting Rights, Environmental Justice, Affordable Housing and Homelessness, and Transportation Concerns.

Our local South Hampton Roads Chapter has many achievements to be proud of over the last 6 years, including successfully blocking a rezoning effort in Chesapeake which would have shut down Providence Mobil Home Park leaving many families homeless. They got home park protection ordinances passed in Virginia Beach and Chesapeake. They worked in support of the referendum to expand light rail in Virginia Beach. Their efforts were crucial in the passage of an ordinance limiting predatory lending in Chesapeake. They had a successful campaign to build affordable single room occupancy units in Norfolk, Chesapeake, Portsmouth and Virginia Beach. They are actively pushing the “Ban the Box” effort limiting employers from asking about prior criminal convictions on job applications, and their efforts have led our state Attorney General to allow in-state tuition to the children of undocumented immigrants and to decreasing harassment and unlawful immigration and customs enforcement for immigrants in our community.

In addition, local Chapter head and organizer, Teresa Stanley states, “Ana Castellanos, one of our South Hampton Roads Chapter leaders working on obtaining her DACA (deferred action for childhood arrival) status, recently participated in a Human Rights Community Conversation with city decision makers in Virginia Beach. Following the event, the superintendent of Virginia Beach schools invited Ana to sit on a newly-formed task force to address enrollment concerns for immigrant families. We are so proud of Ana!”

State wide Virginia Organizing Board member and Chapter leader Debra Grant states, “This is how we make change in our community! There has also been a great deal of commitment in regard to state and national issues like the passage of the Affordable Health Care Act, Medicaid expansion and Comprehensive Immigration Reform. The chapter has gathered every month for 2 years to hear the stories of those most negatively affected by the broken immigration system and to press legislators to pass a comprehensive immigration reform bill, as well as to pressure Obama to use his executive power to act to provide temporarily relief for families. Criminal Justice Reform to include racial profiling issues, Climate Change and Economic Justice issues such as curbing predatory lending, big bank divestment, living wage, social security protection etc… as well as LGBT equality and fairness issues. We’ve been really busy!!!”

I have found Virginia Organizing to an effective, politically mature grassroots citizen activist group. These are warm, truly dedicated people who make a difference in our community and state. Becoming involved is rewarding and even fun. Our local South Hampton Roads chapter, meets monthly at the Thalia United Methodist Church, 4321 Va. Beach Blvd. and welcomes your participation. The most effective way to overcome cynicism and helplessness is to link up with folks who are doing something. To learn more about Virginia Organizing, go to their website at virginia-organizing.org. To get involved or simply find out more about our local chapter contact our local organizer, Teresa Stanley at [email protected]. You’ll be glad you did.